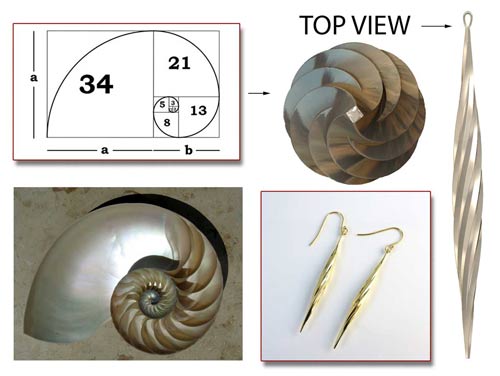 The Fibonacci sequence is a pattern of numbers named after the mathematician Leonardo Pisano, later called Leonardo Fibonacci. This sequence is sometimes called “nature’s secret code” or “nature’s universal rule”. It is easy to find in nature. The pattern creates precise beauty in trees, flowers, shells, and more. It has also shaped the designs of architecture, art and jewelry through history.

The sequence is that each number equals the sum of the two numbers before it, e.g. 1, 1, 2, 3, 5, 8, 13, 21, 34,…. Even though it was noted in ancient Sanskrit prosody many years ago, Fibonacci was the one who brought the formula into the world of mainstream Western theory. It has become one of the most famous formulas to date.

The Fibonacci sequence is closely linked to the ”golden ratio”. This is shown by the Greek letter “phi” (a/b = (a+b)/a = 1.6180339887…). This ratio is said to hold the code to beauty and can even reveal what the perfect human face and body would look like. The golden ratio is also often seen in nature and inspires many artists and designers.

As a result, the Fibonacci sequence and golden ratio are seen in phenomena from stunning patterned seashells to the pyramids of Giza. The principles of the golden ratio are often taught in both math and art classes. Both of these formulae show off the clear links between accuracy and beauty.

The Fibonacci Sequence And Golden Ratio In Nature

The sequence can be seen all throughout nature. For instance, the spiral that forms in the centre of flowers such as daisies. These sequences also appear in the branching of trees and flowering of plants.

This harmony has been used as a tool by many artists and designers over many years. When this sequence is used in design, it creates a stunning, harmonious look. This is why the golden ratio can be seen in Egyptian pyramids and Greek sculpture. The formula has also been used in art by famous names such as Salvador Dali, Raphael and Leonardo Da Vinci. Da Vinci even went on to draw pictures for a book about the golden ratio called Divine Proportion.

Just as many artists have worked with the sequence and golden ratio before, ARY D’PO worked these formulas into their quality jewelry designs. They were the main idea behind the elegant Twisted Collection. These minimal designs are perfect for day to day wear, or an evening event. The rhodium or gold plated jewelry of this line is crafted to show the stunning links between math and jaw-dropping art.