ARY D’PO is the proud creator of a designer jewelry collection inspired by the gingko tree. These earrings and necklaces are brought to life by the strength and beauty of this incredible piece of nature. 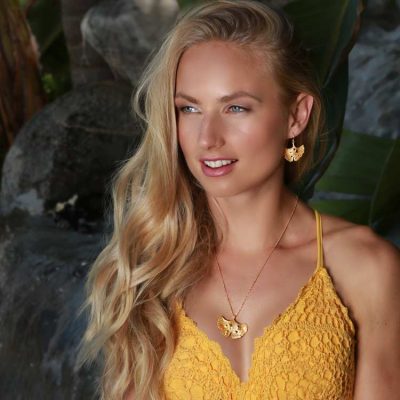 The ginkgo (aka ginkgo biloba or maidenhair tree) is one of the oldest trees in the world. Some fossils are shown to be as old as 270 million years. The ginkgo tree is native to Asia, but has been grown in Europe and the United States since the 18th century. In the wild, it grows as big as 50 feet tall.

In art and literature, this tree is often used as a symbol of survival and standing strong. This is because gingko trees are known for living around 200 years and being able to withstand very harsh conditions.

Gingko trees in Hiroshima even survived the damage caused by the atomic bombs dropped on the city in 1945. Although the leaves and bark burned off, the tree remained living on the inside. Research suggests that the ginkgo gene is mostly unaffected by mutation through radiation. The roots held fast to the ground, and they continued to bloom the following year. Since then, the gingko tree has been known in Japanese culture as a “bearer of hope” and a symbol of rebirth following the war.

Ginkgo leaves are paper thin, with a beautiful distinctive shape. Veins spread out into the leaf blade like a lavish hand fan. Their beauty and association with strength makes them a great inspiration for designers and artists, particularly in Asian culture. Gingko are often seen in paintings, sculpture and jewelry. As a gift, ginkgo leaf jewelry can represent perseverance and strength.

What is ginkgo used for?

Gingko’s association with strength and longevity is not just symbolic. It has powerful medicinal properties. Ginkgo extract has been used in food and medicine for thousands of years. You can find many types of dietary supplements with ginkgo extract to aid health and longevity.

The extract improves blood circulation, which helps the brain and body to work smoothly. There is evidence that gingko is effective at fighting bacteria. It is used to treat altitude sickness, cognitive disorders, dementia, dizziness, to promote blood flow, and many other uses.

Because of Ginkgo’s amazing healing effects and striking appearance, these distinct leaves have also shown up in art for thousands of years. Murals of gingko trees were found on the walls of royal Chinese tombs from as early as the late 4th century.

Since then, gingko has appeared in many paintings and has also been featured in poetry since the 11th century. From around the 17th century, it has been used as an engraved motif on objects such as swords, handheld mirrors, ceramics, and many more.

The Japanese often feature gingko in their traditional haiku poems. In these works, the tree is used to show growth, strength, healing and soothing. 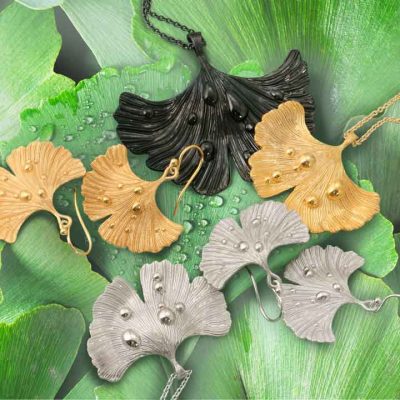 The powerful strength and healing effects of gingko makes this tree an inspiring part of the natural world. The dainty and intricate leaves are subtly stunning and elegant. It is for these reasons that ARY D’PO was inspired by the gingko tree to create lines of jewelry featuring this ancient plant.

The Ginkgo Leaf After Rain Collection combines the strength of gingko with the powerful effects of rain. In art, rain often symbolizes rebirth and new beginnings. This collection features gingko leaf pendants and charms dotted with raindrops. These necklaces and earrings show rejuvenation and the resilience of life.

The pieces in black rhodium capture the magic of walking through a forest at night. This experience is very calming and spiritual. ARY D’PO strives to capture the peace of these dark hours of night when one is encompassed by big, strong trees.

This collection celebrates beauty and deliver positive energy to our customers. To a long and healthy life!