There are hundreds of beautiful gemstones used in jewelry and for other decorative purposes. Each has its own unique meaning, use, and look. When buying jewelry, it’s important to consider the different types of gemstones and choose the ones that best suit your personal style. Whether it’s a garnet pendant or agate earrings, wearing jewelry that makes you feel like your best self is always a good idea.

A gemstone is a mineral which has been cut, polished, and is used decoratively. There are many different types of gemstones, and each one has its own unique qualities. One of the main uses of gemstones is for jewelry, where the precious stone is used as part of a necklace, bracelet, ring, or earrings.

Most gemstones are created through natural processes. For instance, agate and opal are formed when the minerals react with water that are found just below the earth’s surface. Others, such as turquoise, are created when water comes into contact with copper-rich rocks.

While gemstones are usually known as a natural phenomenon, many man made varieties are becoming popular. For instance, cubic zirconia is made in a laboratory, and is often used in place of diamond. While the stones look much the same, cubic zirconia is far cheaper than natural diamond. Whether you choose natural or man-made gemstones comes down to your own preferences and values.

Why are gemstones used in jewelry? 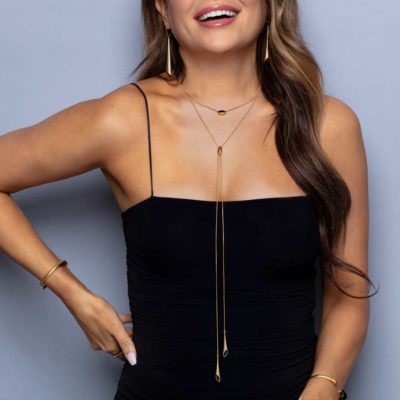 Ever since the beginning of recorded history, humans have been attracted to gemstones. Their eye-catching colors, sparkle, and shine are among the many features that have always drawn people to them. Early civilizations, such as the ancient Egyptians, would fashion gems such as turquoise and jasper into gorgeous necklaces and charms. Ever since, gemstone-adorned jewelry has been a staple part of fashion.

Of course, people aren’t just attracted to gemstones because they’re pretty. They’re also often symbolic. Many cultures throughout history have associated gems with special powers, protections, or other symbolic meanings. Gems have been worn as a talisman to protect the wearer in the Middle Ages in Europe, in Native American cultures, and many others.

The most popular gemstones used in jewelry

There are more than 2000 identified natural minerals, but less than 100 of these are used as gemstones. Gemstones used in jewelry must be pretty, but they also must be fairly easy to find and work with.

On this list, we have some of the main gemstones that have remained popular throughout the centuries. The ones that you choose for your own jewelry will be a matter of your own taste, as each has its own unique features. 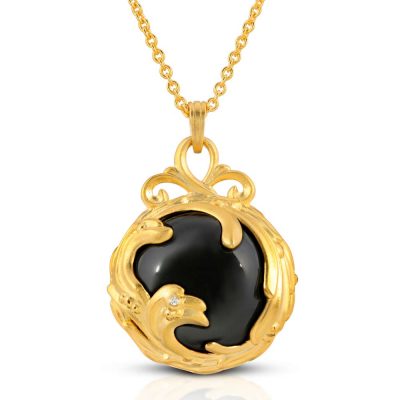 Agate is a member of the quartz family, and gets its name from the Achetes River in Sicily, where it was first found. Sometimes called the “earth rainbow”, its ornate bands show almost every color you can think of. There are many types, such as black agate, moss agate, and fire agate.

Many designers take advantage of the many varieties of agate. The ARY D’PO Black Jewel collection includes earrings and a pendant which incorporate black agate and diamond. The gold plating and dark agate jewel creates an elegant energy, reminiscent of the Palace of Versailles.

Amethyst is a beautiful violet-colored gemstone. Like agate, this is a type of quartz, but the iron within the stone gives it its well-known hue. This stone was very popular in Ancient Greece. They would wear it as jewelry, and even made cups from it in the belief that it would prevent them from getting too drunk.

Amethyst is still a popular gemstone today. Many people also keep amethyst around the house or wear it because it’s known for creating serenity. It’s the birthstone for February, so many women born in this month like to wear it. Due to its eye-catching color and affordability, it’s no wonder so many people love it.

Citrine is very similar in composition to amethyst. However, when the iron within the stone heats up, it turns to a yellow color. This can range from pale yellow to a deep honey-like shade. The heating process sometimes happens naturally, but heat-treated citrine is also common.

Many people wear citrine or have it around the home. Ancient practices of feng shui associate citrine with prosperity and abundance. It is the birthstone for November, so often worn as a pendant or charm by women born in this month.

Garnet is best known for being a gorgeous red-toned gemstone. However, it comes in many colors including orange, brown, green and, rarest of all, blue. Garnet was very popular in the late Roman period. Thousands of red garnet shipments were made in the old world, to Rome, Greece, the Middle East, and the Anglo Saxons.

Today, garnet is still a popular gemstone for jewelry. It’s known as the birthstone for January, and frequently appears on rings, pendants, and earrings. Garnet is the official gemstone of New York, and the state gemstone of Idaho.

Opal is a dreamy, delicate gemstone that gives off an ethereal charm. The most well-known variety is white opal, which is a milky color with streaks of rainbow throughout. However, fire opal is another gorgeous variety. It includes warm orange tones, and looks like a tiny sunset.

Opal is the birthstone for October, and is considered quite soft. Because of its many cracks and open areas, it can be prone to tarnishing. Despite this, opal is so stunning that many people want to wear it anyway. If you’re looking for opal jewelry, make sure it’s well-protected by surrounding hard metals, like gold or silver alloys. 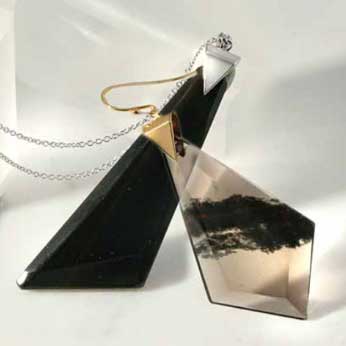 Obsidian is a form of natural glass formed by the rapid cooling of volcanic lava. While it appears in many different varieties, it’s usually shiny and black. Obsidian has been used for items such as jewelry, spearheads, and knives. However, Mayans and Aztecs believed obsidian worked as a mirror to other realms, and would also use it for rituals.

ARY D’PO is one of many modern jewelry boutiques who have embraced the beauty of this naturally occurring gemstone. The ARY D’PO Enchanting Obsidian collection draws inspiration from ancient uses of the gem, but combines it with modern design practices. The result is an elegant, clean-lined collection of earrings and pendant necklaces.

Turquoise is a semi-precious gemstone, known for its opaque green or blue color. It’s often used in Native American jewelry. In Navajo culture, it’s known for bringing good fortune, so it’s often worn as a good luck charm. Other tribes associate it with similar meanings, such as strength, skill, or invincibility.

Turquoise is quite a soft gemstone, so it’s not always the best choice for daily wear. However, it’s also very affordable, so tarnishing isn’t too much of a worry – unless the piece has special significance to you.

When you think of precious gemstones, diamonds are one of the first that spring to mind. Diamond is one of the rarest and purest gemstones. It’s also famous for being the hardest material found on Earth. The value of a diamond is determined by four factors. These are Cut, Clarity, Color and Carat. The higher the grading scale across the four Cs, the higher the value of the diamond.

It’s no surprise that they’ve long been a status symbol for many women. It’s often used for engagement rings, earrings, and other pieces of stunning jewelry. When it comes to gemstones, diamonds are truly in a class of their own. If you’re looking for a really special piece of jewelry, diamonds are definitely the classic choice.

Cubic zirconia is a modern, lab-made gemstone. It is the cubic, crystal form of zirconium dioxide. This gemstone is best known for being an alternative to diamond. It looks similar, but is far cheaper to make. It’s also quite durable, and doesn’t come with any of the ethical issues associated with diamond mining.

While cubic zirconia isn’t quite as bright or rare as diamond, it is still a very popular gemstone. And to the untrained eye, it looks just like a diamond. For daily wear jewelry, cubic zirconia is a great way to get that classic diamond look without breaking the bank. 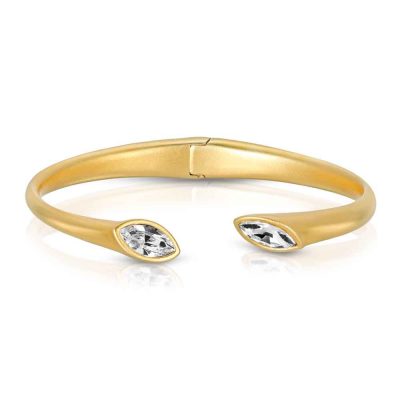 Swarovski is a long-running Austrian jewelry brand, best known for creating high quality lab-made crystals. The company produces many products, from sculptures to telescopes. However, they’re best known for their little diamond-like gemstones. These come at a wide range of price points, as well as quality.

It’s important to note that, despite the name, Swarovski crystals aren’t crystals – or gems. They’re a form of glass which is created with a special patented process. While a trained eye will be able to spot the difference between them and real crystal, they still give off that classic sparkle that many jewelry fanatics love.

Which gemstone will you choose?

Classic diamond? Ethereal opal? With so many stunning gemstones used in jewelry, it can be hard to pick what’s right for you. If you’re buying jewelry for yourself, think about the special meaning of the piece. Choose something that makes you feel like your best, most confident self.