When we put on our favorite jewelry, many of us don’t think about the fact that we’re taking part in carrying on a legacy that has existed for millennia. Jewelry has been around since Neanderthal times, and has long been an indication of power, status, and more. It’s been used to ward off evil spirits, to show love, as a religious symbol, or simply to adorn a lovely outfit. In this article, we’ll explain the many purposes of jewelry, and give an overview of how the relationship between jewelry and fashion has evolved to where we are today.

It’s wild to think that jewelry has actually been around longer than humans. The oldest jewelry ever found are some beads made from small shells, unearthed in a cave in Southeast Spain. They are believed to be 115,000 years old, and made by Neanderthals – not humans. Beads have been found in Kenya, and a marble ring and stone bracelet in Russia, all of which are also thought to be around 40,000 years old.

In prehistoric times, most jewelry was made by materials from the creator’s surroundings. It’s believed that most jewelry was used as a talisman – a good luck charm. This means they were important for protecting against evil spirits or the dangers of life. For instance, animal teeth would be given to people such as hunters to keep them safe against wild animals.

Recovered tombs have revealed people wearing necklaces made of snail shells, seashells, animal teeth, claws, and more. It’s thought these would have marked people’s purpose and role in their community. 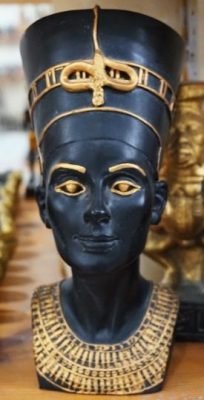 Ancient Egypt was a very successful ancient civilization. They developed many areas of society, like trade, farming, and the legal system. Jewelry is no exception. Egypt has long been rich in stone, copper and lead ore, gold, and gemstones. Their many natural resources prompted the Egyptians to connect jewelry and fashion, creating pieces for people to wear to show off their status.

These ancient people had a taste for the finer things, so often used gold for their jewelry. This metal is luxurious, rare, and easily malleable. Their necklaces and bracelets were mostly used to symbolize power and were worn by wealthy Egyptians. Along with gold, they also created ornate pieces from silver, colored glass, and precious gems.

The influence of Rome

While other ancient cultures, such as the Greeks, did wear jewelry, it was the Romans who really embraced it. They had access to resources like gold, bronze, bone, glass, and pearls to create their pieces. Romans even imported sapphires, diamonds, and emeralds from places such as India and Sri Lanka to create jewelry. Their most common style of jewelry was the brooch, which most people used to secure clothing.

Their more meaningful jewelry was often used to protect from the “evil eye”. This is a look or stare people would give each other, believed to bring bad luck. Women often wore a large range of jewelry, and men tended to wear at least one ring, or more. These rings would often have an engraved gem, which was used to stamp wax onto documents.

After Rome fell, their ways of making jewelry and preferred designs spread out across other countries and tribes. For instance, the wax-stamp ring was used in Europe well into medieval times. We likely still see the influence of Roman jewelry today.

After the fall of the Roman Empire, jewelry continued to be popular all over Europe. By the twelfth and thirteenth centuries, jewelry all over the continent had taken on some distinct similarities.

As Christianity was very popular at the time, jewelry tended to have religious undertones. Designs also often were inspired by aspects such as arches seen in Gothic architecture, or the colors used in stained glass windows would be mirrored in gemstones. The natural world was also prominent – animals and flowers were often used as inspiration.

By the Renaissance period, world exploration and travel was well underway. This meant that jewelers now had much better access to a wide supply of gemstones. One Renaissance period jeweler hid his stock, and when it was uncovered in 1912, they found emerald from Colombia, amazonite from Brazil, ruby from India, and more. These exotic stones were very popular among wealthy women.

In 1804, Napoleon Bonaparte was crowned as Emperor of France. He loved jewelry and fashion, and is known for making it popular among the French. Under Napoleon, jewelers began making “parures”. These were sets of matching jewelry, such as diamond earrings with a matching necklace, and were highly sought after.

Napoleon’s rule took place around the same time as the industrial revolution. With the rise of machines, it became far easier to mass produce a wide range of products. One of these products was jewelry.

Jewelry was no longer something that had to be made by highly trained craftsmen. As a result, Tiffany & Co. was founded in the United States in 1837. Cartier SA was launched in France in 1847. In 1884, Bulgari was founded in Italy. All of these brands are still very popular today. 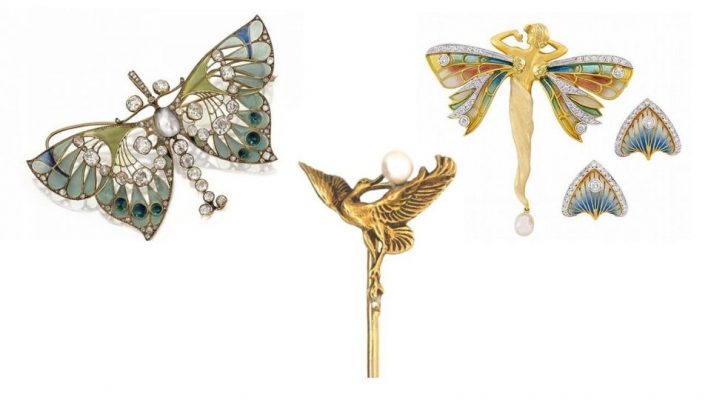 With so many more production methods and materials available, jewelers began creating new styles and focusing on jewelry for fashion. In the 1890s, the art nouveau period took off. This stunning style is known for its femininity, color, symmetry, and nature-inspired designs. Many of these pieces still exist as antiques. They are known for elements like vines, flowers, birds, insects, and more.

The rise of stunning art nouveau came to a halt in World War 1. It was a dark time, so more somber styles gained popularity. As many women had to work for the first time, after being widowed, clothing and hair became more casual. Jewelry also became more pared back.

Of course, in the “roaring twenties”, elegant styles took off again. Diamonds, gemstones, and art deco styles were all the rage. And the 1950s and 1960s was influenced by Hollywood glamor. Fur coats, diamonds, gold, and silver were all very popular at this time.

And because women were becoming more independent, they started buying their own jewelry, rather than receiving it as a gift. To meet the demands of personal tastes, styles became much more diverse. Throughout the twentieth century, jewelry took hold as a way of expressing yourself. Women would wear jewelry to show their mood, feelings, and personality.

Jewelry in the modern era

It’s the 21st century, and jewelry is more popular than ever. In our globalized society, jewelry now borrows materials, designs, and manufacturing techniques from all corners of the world. Rings, necklaces, bracelets, and earrings are used for a wide variety of purposes. One key purpose is as a symbol of love and commitment, such as a wedding ring. Special pieces of jewelry are often given to represent a life event, such as a birthday or graduation.

But not all jewelry has such deep meaning. It is also worn for fashion, and trends are vast. Celebrities and models are always seen in creative and fresh jewelry pieces, and it’s fun to try out these new looks. Gender norms are also getting broken down. This means all kinds of jewelry are being worn freely by both men and women.

Women also have more freedom to express themselves than ever before. Her fashion and style is one of the best ways to do this. By wearing jewelry that shows who you are, you’re showing the world that you’re proud of your own identity. A woman’s jewelry is very connected to who she is, and the self-confidence she feels.

The ongoing influence of jewelry and fashion

In this article, we very briefly covered the history of jewelry and its influence on fashion, but it would be impossible to cover the whole story. India, China, Russia, the Pacific, and South America are other parts of the world with very rich and detailed cultures when it comes to jewelry. You could write a whole book about how jewelry has developed around the world, and still only cover a tenth of the topic.

It is truly amazing how, today, we get to continue to be a part of this long and meaningful aspect of history. Next time you’re getting dressed and finish off the outfit as you always do, by putting on your favorite earrings or necklace, take a moment. Think about the way that these tiny and precious pieces of art have bonded people across so many societies and for so many thousands of years. Humans have always been drawn to the incredible energy of jewelry, and its power is just as strong today as ever before.